To his mind, Karist is The Limestone Cowboy – the heroic protagonist from a tale woven and told by his late father, Noel. To his mind, he’s the quintessential hero and saviour from the American Wild West. 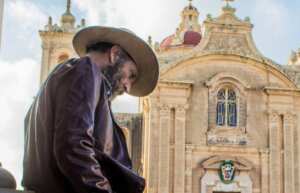 But to everyone else’s mind, Karist is unwell, a delusional village imbecile.

Karist is a national celebrity and his son John loathes it. For as long as he’d care to remember John has been scaling the corporate ladder, distancing himself from his humiliating beginnings one validating rung at a time. He was doing well too until Tommy joined the fray… Tommy, the magic maker who shot John’s mad father to his parabolic apex with a thundering boom for all to behold.

Limestone Cowboy is written by Carlos Debattista and Jon Mallia, and directed by Abigail Mallia. It stars Paul Portelli in the main role, as well as Davide Tucci, Irene Christ, Paul Cilia, Mark Doneo and Terry Camilleri, amongst a host of other local talent.

The film will premiere at the Eden Cinemas in St Julians on Saturday 13th April. A Q&A session with the producers, director and cast will follow after the movie. It will then be showing at Eden Cinemas as from the 19th April.

More information may be obtained from the Facebook page.

Watch: The eternal tale of doomed love – Swan Lake live on screen at the Eden Cinemas