On Saturday’s edition of Andrew Azzopardi on 103, presenter Lisa Spiteri recounted her guilt at not being able to be with her grandfather on his death bed as he succumbed to Covid-19: and her anger at the way some seek to minimise the death of the elderly.

Spiteri’s 91-year-old grandfather, a care home resident, had died last September, and the NET TV presenter recounted her anger at the indifference that can be shown towards older victims of the pandemic.

“It is irrelevant whether someone is 90, 70 or 50; a death is a death, and if not for Covid-19, my grandfather would still likely be among us,” she maintained.

“He may not have been the picture of health, but the truth is that we could still enjoy each other’s company.”

The restrictions introduced as a result of the pandemic had already been hard on Spiteri’s grandfather and on the family: the separation made it effectively impossible for them to communicate, in light of his health issues.

“We could not hold him, and he could not recognise that I was there,” Spiteri recounted. “It was painful for us to try to speak to him from half a room away in vain.”

But what was even worse was that Spiteri’s grandfather could not be surrounded by his loved ones on his death bed.

“You feel guilty: he was always there for me,” she said. “But in his last moments, I could not be there for him.” 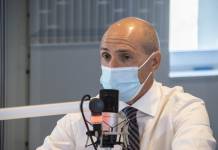