Chef Hany Harb is the man behind Team Malta for Beirut – a group of chefs from Malta who have recently arrived back from Beirut, Lebanon where they helped feed some of the many thousands displaced by the recent blast.

Team Malta for Beirut was part of an emergency kitchen producing 15,000 meals a day to feed the Beirut explosion victims.

When the blast occurred, it took Hany some time to make contact with his family and to find out they were safe and sound. One of his cousins actually works very closed to the site of the explosion, but that day, he was not on shift. Hany also got over 1,000 message about the tragedy, mostly from Maltese friends whom were concerned about him and his family members in Beirut. That experience was life changing, he said, and he felt the urge to go to Beirut in person and help.

At first Hany was ‘alone’, but soon he had amassed a team of local chefs consisting of Rafel Sammut, Jean Galea Souchet, Marko Pavlovic, Robert Bonello and Zach De Marco. Holding the fort down in Malta was Hany’s wife Claudienne. Their counterparts in Lebanon were Chef Joe Barza, Mirvat Sarkisz and Chef Fadi Younes.

Speaking to Newsbook.com.mt, Claudienne said that the thought of Hany and his colleagues going to Beirut was a very scary one at first, but she immediately encouraged him to go.

“We didn’t know what they were going to find,” she explained, “Initially, we still were not hundred percent sure whether it was a terrorist attack or not.”

This was the first time Hany had been to Lebanon in 20 years.

“As soon as you get back, you start remembering things… but then you look at Lebanon as it is, and you say how sad,” he said, “It was the jewel of the Middle East, and now it’s kind of nothing – it has no ‘value’. People on the streets, people hungry, people looking for shelter. Its a devastating situation.”

Team Malta for Beirut has also raised money to benefit those that have lost their livelihoods after the explosion. Claudienne explained that even this was difficult as they had to make sure that the money reached the right entities/people. One thing that struck both of them, was how generous people can be.

“When we get together us Maltese… actually it’s not only the Maltese – because we had clients, the Turkish, Serbian and Libyan communities, together with the Maltese – we reached €50,000 in a week!” enthused Claudienne.

A group of chefs from Malta were Beirut, Lebanon to help feed some of those displaced by the recent blast
Team Malta arrives in Beirut 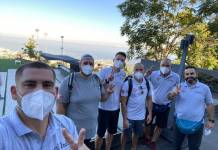