Father and son duo Joe Mike and Lydon Agius are the winners of the very first Malta’s Got Talent competition, earning them a €25,000 cash prize.

After weeks of spectacular (and some less-than-spectacular) performances ranging from singers to dancers, acrobatics to accents and sound effects to stunts, the previous Golden Buzzer recipients were the one that ultimately won over the hearts of the Maltese public.

Father and son duo, għannejja (folk singers) Joe Mike and Lydon Agius performed what is known as a makkjetta. Lydon is only five years old but his stage presence – and memory – is impressive.

The other finalists were: 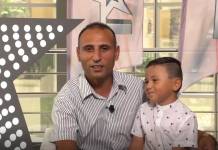 Do you agree with the Maltese public’s vote?

Who is going to win Malta’s Got Talent?

Watch: “Before I sing, I dedicate the lyrics to my dad” – Yulan Law, Malta’s Got Talent