A €20 million investment within the Malta Customs Department is resulting into a great success, said the Minister for Finance and Work Clyde Caruana during a visit to the department on Thursday, following the biggest narcotics seizure recorded in Malta, which was announced yesterday.

Caruana noted that other investments have been made in order to be able to scan as many containers as possible at the Malta Freeport.

Minister Caruana has also expressed his gratitude towards the Malta Customs Officials for their work saying that the results achieved by this department should be achieved in other sectors too.

It was Minister Caruana who on Wednesday, during a parliamentary sitting, announced that Malta Customs recorded the biggest narcotics seizure in Malta, a record of 612kg of Cocaine found in containers at the Malta Freeport by the department.

The Director of the Malta Customs Department, Joseph Chetcuti in his comments with Newsbook.com.mt gave a brief explanation of how the containers were intercepted.

The drug with a street value of €69 million was found concealed within pallets that were carrying cooking oil. The cargo, destined to Libya, left Ecuador and transited through Colombia before being intercepted by Customs in Malta. 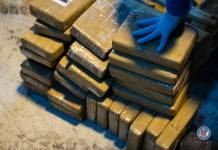