The Administrative Secretary of the Archdiocese of Malta, Michael Pace Ross, underlined that the Church both universally and in Malta is highlighting the importance of safeguarding the environment, warning that failure to do so would result in greater inequalities.

Pace Ross was speaking during the first Business Breakfast organised by Newsbook.com.mt in which the greening of the economy for a better quality of life was discussed. 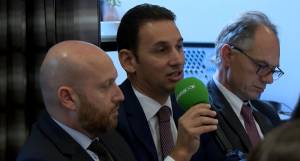 Pace Ross explained that the safeguarding of the environment is intrinsically linked to the fight against global inequalities, adding that the world is already facing such inequalities. He remarked that this should not only be limited to the local context, but one has to look beyond our shores, citing the deforestation of the Amazon as an example.

Reminding that the Church’s mission is to save souls, Pace Ross stated that every time a tree is chopped down, it has an effect on our soul. He concluded by saying that the environment and the economy go hand in hand, and therefore the natural environment needs to be protected.

‘Where do we go from here?’ – Professor Maryanne Lauri

Professor Maryanne Lauri remarked that she would be very happy if what was discussed during the Business Breakfast would become a reality, adding that she’d be very happy.

In her comments to Newsbook.com.mt, Lauri asked what will happen now that the discussion is over? Will the points raised be taken on board and therefore kick starting change?

Caritas Malta Communications Officer Marika Cassar during her intervention said that Caritas Malta is very vocal on issues such as the widening gap between the haves and have nots. She highlighted the plight of young families who do not have the means to buy a family home and instead are turning to cheaper options in which basement garages are being turned into an accommodation. She underlined that the numbers are not small, and is on the increase.

Cassar also spoke about the lack of open spaces which is making one feel ‘suffocated’.

‘An overhaul in our planning and environmental policies is needed’ – Calleja

‘Is the quality of life, a right?’ – MP Claudette Buttigieg

Opposition MP Claudette Buttigieg who was also present at the Business Breakfast asked whether the quality of life is a right. Referring to comments made by Malta Developers’ Association president Sandro Chetcuti, Buttigieg said that she could not agree to a statement he made claiming that the developers are the victims. She underlined that the real victims in our society, are those mentioned earlier by Caritas Malta PRO Marica Cassar. Buttigieg added that while planning gives you a sense of future, enforcement needs to be addressed.

Watch: Sobriety is the name of the game