Finance Minister Edward Scicluna said he would have resigned if he was in Mizzi’s position following the aftermath of the Panama Papers scandal which the Labour MP was embroiled in.

Newsbook.com.mt asked Scicluna whether he agrees with Deputy PM Chris Fearne that Konrad Mizzi should have been kicked out of Cabinet in light of the Panama Papers scandal. Fearne is contesting Saturday’s election which will also determine who will be Malta’s next Prime Minister.

Speaking to the press after a press conference on the 2020 Budget, Scicluna said that he already made his views about the Panama Papers known in parliament and during political meetings about this.

“What I don’t want is you hijacking my session about the budget by speaking about Panama. It is an important subject, but it’s not today’s subject. My friends know what I think about Panama,” said Scicluna.

“If I were in that position I would have resigned,” he later added.

In the past, Simon Busuttil, former leader of the Partit Nazzjonalista had said that Malta’s institutions had “flagrantly and consistently” failed to act against Konrad Mizzi and Keith Schembri over the three-year period since the Panama Papers leak. 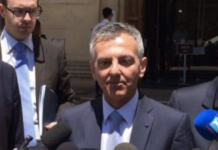