A woman speaking to Newsbook.com.mt during a Vox Pop said that one day she thinks that Malta would sink due to the over development. Some days ago, journalists from this newsroom asked individuals in Ħamrun, Pietà and Valletta whether they would feel safe inside their homes if there were ongoing construction and excavation works. 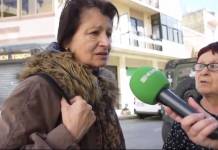 A woman speaking to this newsroom replied with a definite ‘no’. She recalled how a friend of hers had been involved in a building collapse incident when the bedroom wall collapsed. The woman who was also active in environmental initiatives which took place locally to save a valley in Mosta, clearly stated that she fears that one day the country would sink “like Atlantis” if development continues unregulated.

The woman said that Maltese are losing their natural and cultural heritage at the expense of over-development.

“People are demolishing sites which have cultural values,” she said. “The authorities have to not only consider the people’s safety but also the country’s heritage.”

Last Monday, a woman was killed in the latest building collapse. Miriam Pace, 54, of Ħamrun was found under the debris following a search which lasted more than 8 hours. Her family residence is adjacent to a construction site. The police are investigating the case and there is also a magisterial inquiry going on.

We had to seek self-redress

Another man told this newsroom, that his son threatened the architect and the owner of a site where there were ongoing construction works after the contractors kept digging some five-storeys. He feared for the safety of his house however the matter was subsequently resolved.

The man said that he felt helpless and not sure the authorities would take action. ‘What can the police do?’ He asked.

Bricks came tumbling down from a construction site onto the property of a third respondent. The man said that this caused damages to the washing machine and the sewage pipe. He clearly stated that he does not feel safe at his house. However, those responsible will be compensating the victim and carrying out the necessary repairs.