This week’s guest on Personalities OneOnOne has the presenter all in a flutter as she has been ‘fan-girling’ him from afar for quite a while now.

His most annoying habit is being forgetful and he says he probably wouldn’t even have turned up at the interview if it weren’t for his friends reminding him!

According to him the most impressive person alive today is John Galliano.

Each week a celebrity is interviewed by Coryse Borg on a TD Plus bus. Questions can range from “What should they teach in school, but don’t?” to “What doesn’t exist but you desperately want or need it?”

Have you guessed who this week’s mystery guest on Personalities OneOnOne is? Check out the video above to find out. 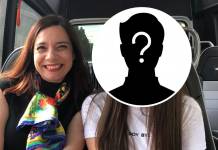 Thanks to: Malta Public Transport and the wonderful TD Plus drivers Josette, Frankie and John.

Watch: “We don’t believe in love at first sight!” – The New Victorians

Watch:”The importance of friendship is my biggest life lesson”

Watch: “My mum is my greatest inspiration”

Coryse Borg   February 17, 2020
An exhibition is being held between the 1st and 14th March at the Razzett tal-Markiz in Mosta by a group of women who meet every Friday at Palazzo de la Salle in Valletta and enjoy painting together.

An alternative opportunity through vocational subjects