Luke Lyttleton is well known for the excellent and totally entertaining videos he occasionally uploads on his Facebook page.

For instance, a few months ago, he uploaded a video of him attempting to beat the summer heat by filling up the back of his work-van with cool water, donning a pair of blue trunks and a red swimming cap, using a forklift to elevate him and executing a well-timed dive into his small makeshift swimming pool, all set to Vangelis’ Chariots of Fire.

Watch: How to beat the Maltese heat 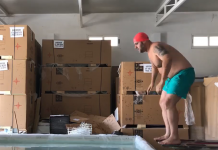 Now he has gone one better by posting a video on how he imagines the large percentage of the Maltese population will behave now that the first cases of Coronavirus have been identified here.

Covered from head to toe in a ‘hazmat’ suit and heavy-duty mask, Lyttleton filmed himself going about his day, from waking up in bed already attired in his suit and mask, to having a shower (in the suit), trying to brush his teeth through the mask, typing away at his office computer – while wearing surgical gloves – and even going to a drive-though to pick up his lunch.

All this to the strains of the theme to The Walking Dead, of course.

Comments on his Facebook post include: “I would nominate you for a best supporting actor and for a best motion picture at the Academy Awards orrrr The Grammy”, “Oh Luke!!!!!!! 🤣🤣🤣 Best one yet!!!!!!” and “I imagined you’d come up with something of the sort… top man”

Well, they do say that laughter is the best medicine, so do yourself a favour and check out the video above!