A vessel owned by Captain Morgan, Europa II, has been loaded with mattresses, food and water, and been seen leaving Sliema early afternoon on Thursday. A protest banner was hoisted to one of the vessels sides depicting a European Union flag and the text ‘European Solidarity’. Newsbook.com.mt is informed that the vessel is to be used to host asylum seekers.

A government spokesperson later confirmed that a rubber boat carrying 57 individuals was adrift in the Maltese search and rescue region. The authorities had localised the rubber boat during the night between Tuesday and Wednesday. The spokesperson confirmed that Malta coordinated the search and rescue operation. The rescue operation took place on Wednesday after the government sought the assistance of a Libyan-flagged fishing vessel Dar al Salam which was recently involved in a push back to Libya. The government said that the necessary arrangements have been made to transfer the asylum seekers to the Captain Morgan vessel. The vessel will then remain 13 nautical miles off the coast of Malta.

The group is composed of male migrants and are in a good health condition.

Both Malta and Italy have moved to close their ports for migrant landings after the coronavirus outbreak. Malta has stated that it could not guarantee sea rescue due to limited resources and has banned humanitarian ships from entering.

The government said that Malta’s position is clear, “ports remain closed”. The spokesperson added that the European Union should show solidarity and shoulder responsibility for these asylum seekers.

Newsbook.com.mt has reached out to the relevant authorities to confirm whether the vessel was being prepared to be used to host asylum seekers currently stranded in the Maltese search and rescue region.

Questions as to whether the vessel would indeed be used to host asylum seekers which were sent to the Office of the Prime Minister, the Armed Forces of Malta and Fortina Investments CEO Edward Zammit Tabona, remained unanswered at the time of writing.

The migrant NGO Alarm Phone has appealed to both the Maltese and Italian authorities to help a group of asylum seekers currently stranded out sea. 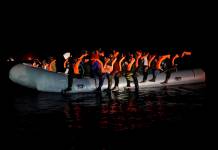 Asked by Newsbook.com.mt whether or not the asylum seekers will be brought on board the Captain Morgan vessel, a spokesperson for the Office of the Prime Minister said that Malta’s ports were currently closed, and no one will be allowed in.

This newsroom also contacted the Armed Forces of Malta over the possibility of using the ship to quarantine the asylum seekers at sea, and was asked to send in the questions in writing. The spokesperson confirmed that she had received the email and would divulge any information once she had it. Asked to confirm whether Captain Morgan’s Europa II will be taking asylum seekers on board, the spokesperson said that she was not in a position to divulge any information, without either confirming or denying the news.

Newsbook.com.mt was in Sliema where a group of people clad in black security uniform were seen. The workers were seen loading mattresses on board. While the Newsbook.com.mt journalists were still there, the vessel was seen leaving the jetty.

Newsbook.com.mt tried tracking the vessel after it left port; however, its Automatic Identification System seemed to be turned off. The AIS allows maritime authorities to track and monitor vessel movements.

On Wednesday, former OPM employee Neville Gafa said that he had coordinated in the push back of 51 asylum seekers to Libya. Asked to do so by Newsbook.com.mt, Gafa did not identify the person who had given him the instructions.