Nationalist Party leadership hopeful Bernard Grech has called for the resignation of Parliamentary Secretary for Active Ageing Silvio Parnis, accusing him of disappearing in the face of a high Covid-19 mortality rate among the elderly.

Malta is presently reporting the highest Covid-19 mortality rate in the EU according to the European Centre for Disease Prevention and Control (ECDC), and Grech issued his statement after three more deaths were reported on Friday.

In a video uploaded on his Facebook page, Grech lamented that Parnis was conspicuous in his absence, and was thus not inspiring faith in the authorities’ handling of the situation. He also expressed contempt at Parnis’ gift of a roly-poly to the elderly at a time where the coronavirus was spreading in homes for the elderly.

“I am convinced that Silvio Parnis should consider his position, and if he does not, then Robert Abela should intervene. It is unacceptable for the person responsible to disappear at this time,” he said.

Grech then added that if the government was not capable of doing this, there was the need for a strong opposition ready to offer an alternative and to provide guidance on what should be done in such a tragic time. 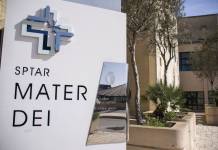