Speaking to Newsbook.com.mt, MPs Anthony Agius Decelis, Glenn Bedingfield, Justice Minister Edward Zammit Lewis, Arts Minister José Herrera and Education Minister Owen Bonnici said that they did not know that an early election would be called. Agius Decelis, Bedingfield and Zammit Lewis stressed that the Prime Minister has the prerogative to call an election when the Prime Minister deemed fit. Asked on how do they explain that Fenech said that he was aware of the snap election back in December 2016, Agius Decelis replied by saying that “Fenech is saying a lot of things”.

“Even now everyone is talking about the possibility of a snap election – if we have a snap election now does that mean that everyone who said so is right? There are those who are saying that government will do its full term. Someone will guess,” Bedingfield replied.

On the other hand, Justice Minister Zammit Lewis said that one should ask murder suspect Yorgen Fenech on how he knew about the snap 2017 election.

Education Minister Owen Bonnici said that the election happened because of the Egrant story and referred to a breach of parliamentary privilege complaint filed by disgraced former Prime Minister Joseph Muscat on Wednesday evening.

“Make sure he doesn’t leave”

The MPs encountered entering the Parliamentary building were also asked whether they were aware of the phone call between Muscat and his then chief of staff Keith Schembri during which Muscat requested him to make sure that murder suspect Yorgen Fenech did not leave the islands. The MPs were asked whether they were aware of this specific phone call. 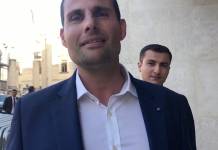 Environment Minister Aaron Farrugia said that he personally was not aware of the said phone call adding that the case should be discussed once the case was closed in court. Similarly Bedingfield said that one should allow justice to take its course and later one could draw their own conclusions.

Debattista flatly replied “I didn’t know” while Education Minister Owen Bonnici declined on commenting any further on the matter.

“No direct allegation against Muscat”

Minister José Herrera remarked that the case of Muscat was different from that of disgraced former minister Konrad Mizzi. He highlighted that at present there were no direct allegations made against Muscat. In the case of Mizzi, the government parliamentary group and Partit Laburista executive had decided on the basis of the new information which had emerged, referring to the Montenegro scandal.

Herrera said that Muscat’s mistake was not taking a decision back in 2016.

“At this point in time, the parliamentary group and the PL executive do not feel that such a drastic measure should be adopted against Muscat,” Herrera said when asked if Muscat’s position within the government parliamentary group was still tenable.

Zammit Lewis said that Muscat was capable of taking his own decisions in his best interests, as well as in the interests of the party and the country.

Borg said that Muscat had an electoral mandate and that he would not tell him on what to do. He remarked that he was proud to have served both in the role of minister and parliamentary secretary during Muscat’s term.