A flamingo became the main attraction for swimmers at Għadira Bay on Tuesday. Not only did many people gather to have a look, but a substantial number of them also snapped pictures of this magnificent bird. Later during the day, Birdlife’s Executive Leader Mark Sultana stated that he saw hunters shoot a young flamingo who was flying in a flock of three in Munxar.

BirdLife Malta explained that even though young flamingos migrate with their adult counterparts, they tend to be more fragile and, because of weariness or injury, they tend to detach from the others.

The NGO also said that when someone spots a lone flamingo, one should call BirdLife Malta for assistance. 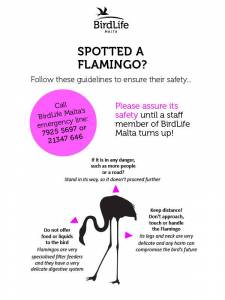 Later during the day, Birdlife’s Executive Leader Mark Sultana stated that he saw hunters shoot a young flamingo, which was flying in a flock of two additional adult flamingos in Munxar.

Sultana posted a video stating that he was waiting for the Police to arrive. Later, he added that since only two police cars went on site, it would be difficult to catch the perpetrators.