The Federation for Hunting and Conservation, FKNK, has published a video showing how the nature reserves in Malta are not accessible to the general public.

In the video, the FKNK filmed the Għadira Nature Reserve which is locked and surrounded by a fence.

Last week the federation secretary-general Daniel Xriha, said that they have requested a meeting with Prime Minister Robert Abela to discuss nature reserves in Malta and Gozo to be made accessible to the public for recreational purposes. 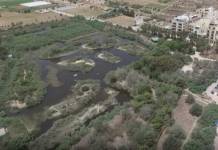 The nature reserves that FKNK is referring to are currently being administered by NGOs; Xrobb l-Għaġin, is-Salini, Foresta 2000, Għadira in Mellieħa and Simar natural reserve in Xemxija.

In April this year, 16 NGOs said they are concerned that through an agreement regarding the transfer of the Miżieb and Aħrax open spaces to FKNK, the general public will be unable to enjoy these areas for a period of at least nine out of twelve months since FKNK wants exclusive access during open seasons to hunt quail, turtle dove and also rabbits.

Independent candidate Arnold Cassola said that Lands Authority stated that the Federation of Hunting and Conservation (FKNK) has no title to Miżieb and Aħrax tal-Mellieħa.

A group of NGOs asked the government to immediately publish the full terms of any agreement regarding the transfer of the Miżieb and Aħrax open spaces to the Federation of Hunting and Conservation (FKNK), which was revealed in April through the media, much to the public’s disgust.

Watch: “Seeing the children smiling means everything to us”

Coryse Borg   May 29, 2020
New social distancing and health measures now in place across all locations

Monique Agius   May 28, 2020
Seventeen individuals have been convicted of rape charges over the past three years, Home Affairs Minister Byron Camilleri told the House of Representatives.