Unsurprisingly, the FKNK hunters’ lobby is harshly critical of the European Commission’s decision to launch infringement proceedings against Malta over hunting and trapping.

In a press conference, it accused an “intransigent” Commission of acting on the basis of “misleading” reports made by BirdLife Malta, with its CEO Lino Farrugia going as far as suggesting that the NGO was harming Malta’s reputation for financial gain.

Farrugia reiterated a popular argument for the FKNK, that the controversial Miżieb and Aħrax woodlands concession ties the federation to manage the sites at its own cost, while environmental NGOs receive funding to safeguard the sites they are granted management of.

This, he said, was exemplified by the state of two historic Buskett farmhouses, of which one was handed over to the FKNK and the other to BirdLife. He insisted that since the Razzett tal-Bosk was not a money-maker for the NGO, it was not being properly maintaine.

On its part, BirdLife Malta maintained that the blame for the infringement proceedings lay squarely with the minister responsible for hunting, Clint Camilleri, stating that he provided the wrong advice to the government, leading it to fail to respect the spirit of the EU Accession Treaty. 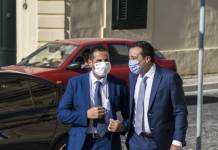