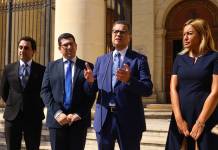 Following the ruling by the Court of Appeal on Monday morning, Delia flanked by his lawyers made their way to the AG’s office in Valletta. Speaking to the journalists gathered outside the AG’s Office, Delia said that the Attorney General is still reading the sentence which was handed down this morning. However, he was informed that he will be invoking his right that this sentence will be executed after two days.

“This is shameful,” Delia stated. He added that after all these months, Grech was unprepared for the eventuality that the Court of Appeal would declare that he breached the Constitution.

“This is a clear case where the AG is complicit in contributing to the current situation in our country,” Delia stated.