The Malta Community Chest Fund Foundation raised €1 million in a 12-hour telethon on Sunday. The fund-raising event titled Għinuna Ngħinukom which was held at Where’s Everybody studios, was broadcast on all television stations and started at noon.

The telethon was organised to make for the shortfall of donations due to the coronavirus pandemic which led to the cancellation of various fundraising events.

During the telethon, President George Vella and his wife were receiving phone calls along with other personalities. 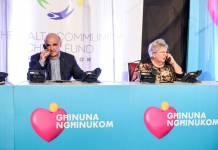