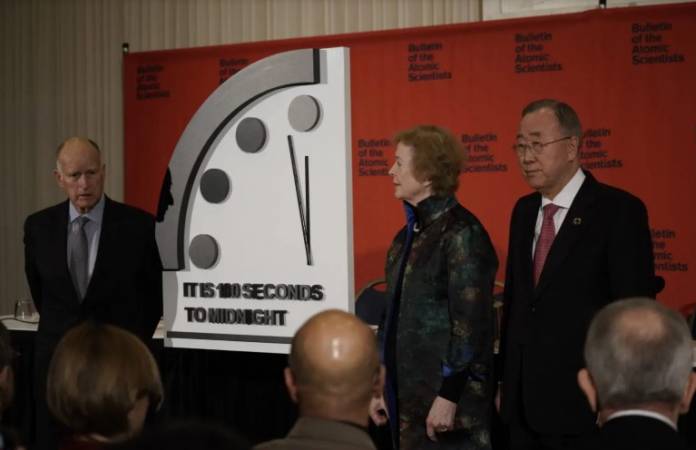 The Bulletin of the Atomic Scientists’ (BAS) Science and Security Board in consultation with the Bulletin’s Board of Sponsors, which includes 13 Nobel Laureates, have moved the Doomsday Clock from two minutes to midnight to 100 seconds to midnight.

BAS said that the change was made due to nuclear proliferation, failure to tackle climate change and cyber-based disinformation.

“Humanity continues to face two simultaneous existential dangers—nuclear war and climate change—that are compounded by a threat multiplier, cyber-enabled information warfare, that undercuts society’s ability to respond. The international security situation is dire, not just because these threats exist, but because world leaders have allowed the international political infrastructure for managing them to erode,” they said.

To underscore the need for action, the time on the Doomsday Clock is now being expressed in seconds, rather than minutes.

For the first time, experts from BAS were joined in making the Doomsday Clock change by members of The Elders. Founded by Nelson Mandela in 2007, The Elders are independent global leaders working together for peace and human rights.

While the Doomsday Clock did not move in 2019, its minute hand was set forward in 2018 by 30 seconds, to two minutes before midnight. The Clock was adjusted in 2017 to two and a half minutes to midnight from its previous setting of three minutes to midnight.

The clock was first created by US scientists who worked on the Manhattan Project, which developed the world’s first nuclear weapon.

Science in the City teams up with other European Researchers’ Nights...