People become homeless for several different reasons. There are social causes of homelessness, such as a lack of affordable housing, poverty and unemployment; and life events which push people into homelessness. It remains important that whoever ends sleeping rough is not condemned or judged.

Some find themselves homeless due to a drug addiction. Fenech said that in some cases, whole families have been affected by a member’s habit. Those participating in the discussion programme, highlighted that there should not be any prejudice against people who find themselves in such situations.

It is important to understand what led to drug abuse, Fr Aquilina said, who shared a personal anecdote. Once a youth told Fr Aquilina that he took drugs to find happiness, just like him.

Bonello underlined that those who are currently going through a rough patch need love and empathy. Many already find it difficult to come forward and ask for help.

The relationship between work and homelessness, including the contribution of unemployment, underemployment, and low wages to homelessness, was also discussed during the programme. Households paying over half of their income in rent and only remaining with €100-200 a month to cover the rest of their needs.

Anti-poverty activist Matthew Borg maintained that low wages are the main reason for homelessness in Malta. He complained about the lack of political will to address the situation. Borg who is a member of the Alliance Against Poverty said that the alliance would like to see the living income concept introduced in Malta.

You can also support the campaign by sharing this article on social media platforms such as Facebook. You can also make a video with a message in solidarity like Newsbook.com.mt u 103 Malta’s Heart did. 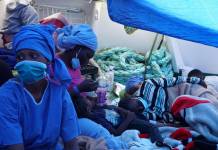