Cottonera resident group Action: Give Us Back Our Land, have issued a short video showing three open spaces in the Cottonera sprouting with greenery and the potential these areas could hold for the community.

The three spaces in question are those the American University of Malta, AUM, would like to build up, in plans to extend its campus. This AUM extension was unanimously refused by the Planning Authority last year after the residents rallied against the project.

The AUM however, has appealed the decision and wants the Planning Authority to approve its extension, without even proposing any amendments to its original plans.

The public land of high cultural and historical significance, was awarded to the Jordanian company ‘Sadeen’ – without a mandate from the public – in 2015 for 99 years.

The group Action: Give Us Back Our Land explained that Cottonera is a densely built area, and should the plans be approved the extension would take up to 25% of the little existing open space.

“After years of operation marred by controversy, the AUM campus seems to be a ghost town with very few students,” said the activist group.

The Environmental and Planning Review Tribunal, EPRT, hearing is to take place on October 1st at 2 pm and can also be followed online. 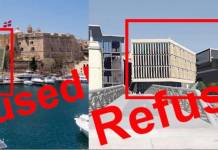 Minister for Education not satisfied with AUM

There should not be an extension of ‘phantom university’ AUM – Delia