Dr Sharples spoke about her studies and work, as well as the various challenges one faces on the job. She, like many others, had to leave her family once the coronavirus hit Malta, in order to protect her loved ones. Dr Sharples who has been a front-liner in the recent pandemic, joined the nursing school in 1983.

Watch: Nursing to the fore 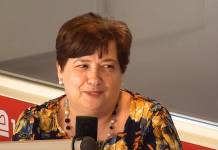 Speaking on Newsbook Q&A, Dr Sharples recalled that a few days ago before she returned to her family home, on her way to her hotel room, she noticed the various rainbows affixed to the balconies and the positive messages various families affixed outside their house during the pandemic.

She explained that when she chose to become a nurse, she knew exactly that it was a vocation. “I knew what I was getting myself into. I knew that I had to risk my life,” she remarked. She added that putting her life at risk was not due to the lack of safety, but after taking all the precautions one could still risk their lives.

Dr Sharples urged all those who feel the call to become a nurse, to pursue their dream.

A typical day at the Accident and Emergency Department

When asked about a typical day at the Accident and Emergency Department, Dr Sharples remarked there is not such thing as a typical day. She explained that one would slowly learn on the job.

She mentioned that the staff would crack jokes among them to keep one’s spirits high despite what they have to face at work.

Dr Sharples who happens to take care of new recruits, would greet the foreign nurses which are working in Malta. She remarked that while on paper qualifications would look the same, programmes might be structured different.

Sharing her personal experience, Dr Sharples recalled the time she went to the UK to work as a carer even though she had already graduated as a nurse. She remarked that despite being able to communicate in English she could not understand what the patient meant when he pronounced “butter” in a different accent. Similarly, nurses who might not have English as their mother tongue might find it difficult initially. She explained that language courses are offered to all foreign recruits. She also spoke about the sense of comradery that exists between the foreign and local staff.

Watch: “It’s our job as nurses to care for people, regardless of the virus”