On Thursday morning, the President of the European Council Charles Michel visited the site in Bidnija where journalist Daphne Caruana Galiza was assassinated nearly three years ago.

Charles Michel held also a private meeting with the Caruana Galizia family and gave his comments to the media.

During his brief visit to Malta, Michel paid a visit to the Armed Forces of Malta’s Air Wing, with the Department of Information stating that he was briefed on the challenges the armed forces faced due to immigration. 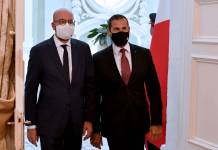