Faced with a chronic, degenerative – and terminal – condition, Bjorn Formosa has chosen to make it his calling, becoming a tireless campaigner in favour of people with ALS and similar neurodegenerative conditions.

Via videoconferencing, Formosa participated in Saturday’s edition of Andrew Azzopardi on 103, where he spoke at length about the condition and his campaigning efforts.

Formosa, who celebrated his 34th birthday last month, ended up founding ALS Malta, a foundation which has established Dar Bjorn, a home for patients with ALS, MS and other conditions.

But demand for the home has long outstripped demand, leading him to campaign for the founding of a second home in Żebbuġ. Over €1.4 million were raised in a fundraiser for this home last September.

Replying to Azzopardi’s questions, Formosa emphasised that he never exaggerated the symptoms of his conditions: the pain he felt was real.

Nevertheless, he said that the condition was “a grace from God” because it has helped him help others.

The foundation rarely features other patients in its campaigning – that burden falls largely on Formosa – but Formosa highlighted that many others faced a similar situation.

On average, ALS patients live on for around 18 months following their diagnosis, though Formosa has received treatment to prolong his life in the hope of continuing his campaigning for as long as humanly possible.

The discussion also veered on the ALS Malta’s funding, with Formosa emphasising that he did not profit from what was a registered voluntary association.

He also emphasised that if donations were used to pad people’s salaries, then the purpose of the foundation he established would be lost. 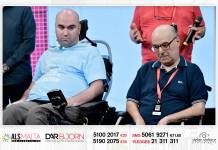 Watch: Is Bjorn always about to die before each fundraiser?