As the seventh and latest addition to the AX Hotels chain, the project involved a €15 million investment in the restoration and development of a 17th century Palazzo into a luxury hotel housing 25 designer suites, all part of the AX Designer Collection, and three dining venues.

Rosselli – AX Privilege is part of AX Group’s long-term plan for the regeneration of Valletta. Angelo Xuereb, Chairman of AX Group, who published a masterplan for Valletta three decades ago, has stressed the need to upgrade and improve the city. His vision included the regeneration of old buildings into boutique hotels, the creation of pedestrian zones and implementation of measures to attract residents back to the city.

“I’ve always believed that in order for the regeneration of Valletta to take place, there needs to be a strong investment from both the private sector and from the Government, which started a few years back and is currently still underway. While AX Hotels are already prominent in Qawra and Sliema, AX Group now saw the need to invest in Valletta”, said Mr Xuereb. 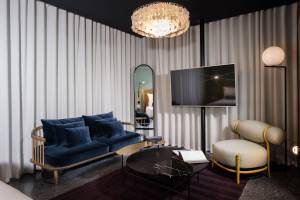 The group’s latest project, led by AX Construction, involved removing accretions to restore the Palazzo to its original state, while taking measures to raise the benchmark for hotels in Valletta. These actions include protecting the building’s limestone against humidity, and installing special lighting effects on the building’s façade.

Events such as Malta’s EU Presidency and Valletta 2018 have highlighted the importance of investing in restoration works and the built environment in the city. AX Group hopes that their endeavours will be emulated by the Government, who are encouraged to install similar lighting effects on the restored façade of the Old University and the Jesuit Church opposite Rosselli.

Mr Xuereb also urged the Planning Authority to erect a new board with an expert understanding of historic buildings, in order to safeguard Malta’s heritage, create well-balanced buildings and be efficient so as to reduce the inconvenience to the neighbourhood. 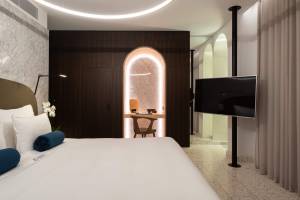 “Valletta is a unique city that deserves high-quality international exposure”, said Claire Zammit Xuereb, Hospitality Director of AX Group. “With Rosselli, we sought to create a 5-star hotel with a difference in order to complement the progress and development that is taking place in Valletta today. Our aim is not to sell rooms, but to add value to the city of Valletta and elevate Malta’s potential to tap into new international markets.”

The inauguration was attended by a number of distinguished guests, including Prime Minister Joseph Muscat and Valletta Mayor Alfred Zammit.