Archbishop Charles Scicluna asked for forgiveness for the walls which were built to separate those who at the time of their death were at peace with the Church and those who were not, in clear reference to the interdict, which came into force in 1961 and lasted until 1969. Late Archbishop Ġużeppi Mercieca had also asked for forgiveness and blessed the unconsecrated ground of the cemetery.

Presiding over Mass celebrated on All Souls’ Day at the Addolorata Chapel in Paola, Archbishop Scicluna said that thousands of Maltese and foreigners were buried there, before referring to those who buried at the time of the interdict in unconsecrated ground and migrants who lost their lives during the perilous sea journey in search of a better life.

Mgr Scicluna told the congregation that among those buried at the Addolorata Cemetery are those who died at peace with the Church and those who were not at peace with the Church at the time when they passed away, and the two categories were separated by an allegorical wall. He added that nowadays those walls have collapsed, as he asked for forgiveness for the walls built which separated our dearly departed.

The bishops then had interdicted the executive members of Partit Laburista and its supporters, at the climax of the bitter Church-Labour dispute in the 1960s. By imposing the interdict, it meant that the persons that were affected by it could not get married in Church nor buried in hallowed ground. 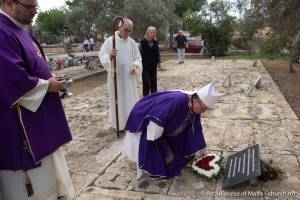 Speaking about our brothers and sisters who drowned in the Mediterranean Sea and were buried at the Addolorata Cemetery, Mgr Scicluna said that while we may place candles and flowers for our deceased, their families do not know what happened to them. Highlighting that it is our duty to take care of our brothers and sisters and to remember them. He added, that maybe we could have taken better care of them during their lifetime. It is important that we remember them now, Archbishop Scicluna added.

During the homily Mgr Scicluna explained that after Mass he would bless each grave irrespective of who is buried there, remarking that death unites us, sometimes more than during our lifetime.