Massive illegal dumping is going on at Ta’ Qali. A very large area roughly 10,000 sq. m equivalent to 10 tumoli of land, was once covered with vegetation. In the 1990’s, the parts of this landscape, now protected, was given over to a Southern Concrete factory.  Although the area was not in pristine condition, it could have been easily rehabilitated. The adjacent photo from Google Maps shows. Today the trees are there no more. Tonnes of construction rubble have levelled the trees and covered the area, creating a completely new and barren landscape.

The massive illegal dumping extended also to large parts of what was a very big factory: Southern Concrete Ltd. The factory itself is 3,400 sq m and over half of it is buried half-full.

One such incident of illegal dumping involving five large trucks, a bull dozer and the car of one of the foremen happened late in the night on Friday 16 November.

Journalists from Newsbook.com.mt were stationed at Ta Qali near the former factory of the Southern Concrete Ltd. They witnessed the illegal dumping between 10.00p.m. and close to midnight.

Dumping in the dead of night

This is their story: 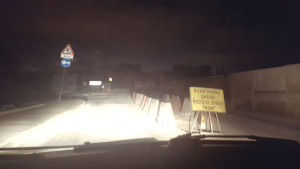 21.00. Newsbook.com.mt do a recce of Ta’ Qali. They enter from the side of the bus stop ‘Venture’ and drive on to the area of the crafts village where construction work with the necessary permit is going on. They drove towards the Aviation Museum turning right towards a number of Nissan huts and onto the area near the Southern Concrete Ltd. They immediately noticed the massive area illegally covered with construction rubble. They then part in a secluded area.

21:30h – Deep silence shrouds Ta’ Qali. The area around the Centenary Stadium is quite desolate, bar a few cars belonging to fitness addicts and other activities best carried out in quiet locations where one is not likely to be disturbed.

21:40h – A soft chug-chug-chug of a heavy vehicle swiftly increases its volume as it approaches. It turns out that this is not one Heavy vehicle but four: One bulldozer and three heavy duty enormous construction trucks followed. Newsbook.com.mt is in possession of the registration number of these trucks. Sometime later a white-ish pick-up-like vehicle followed. Their approach was through the road leading to the Centenary Stadium, turning left after the bus stop ‘Venture’.

22.00. On the other side of the factory where Newsbook.com.mt journalists were located the sounds of activity pick up momentum. The sounds, in an over developed country like Malta, are, unmistakably, those related to construction. Lights were flashing, trucks were unloading their consignment and the bulldozer was levelling everything.

No more trucks approach through the road leading to the Centenary Stadium, so the route must also include other avenues. It does.

23:15h – Newsbook.com.mt journalists drive out of Ta’ Qali and enter trucks observed arriving and leaving through the road which leads to Ta’ Qali from the Infetti Roundabout. On arrival at the junction between the Aviation Museum and the crafts village a police car is seen parked near a large truck. Someone is talking to the police.

Newsbook.com.mt journalists drive around. Another large truck is seen entering Ta’ Qali from the side of the Infetti roundabout below Mdina. This truck and the other one noticed earlier belong to Italians working for the Maltese construction company.

The day after: Saturday 17th November.

The following day, in broad daylight, journalists of Newsbook.com.mt went back to the site. A whole swathe of land has been systematically degraded through the dumping of construction waste.

Newsbook.com.mt can confirm that this is not a one-off tip. This has been happening over a span of time. Google maps’ satellite photo is dated 31st January 2018. At that point, the site, if not pristine, was at least in a status quo of dereliction as it had been for years.

Besides the very large open space which has been buried under tonnes of rubble, there is the abandoned factory of Southern Concrete Ltd. A quick recce of the place shows a derelict ‘shed’ of at least double height, that is, the roof is two stories high, roughly 22 courses, on a conservative estimate. Using the measurement tools available on the PA Geoportal, the ‘shed’ is roughly 3,400 sq metres, A good part of the abandoned factory is buried in debris to the height of one storey. Again using the same measurement tools, an estimated 10,400 sq meters of debris have been dumped.

As is usual in enforcement notices, the owner of the land is dumped with the illegality, even if the illegal act was not of his doing or with his knowledge or consent. Emmanuel Zammit is listed with MFSA as the owner of Southern Concrete Ltd, established in 1994 with the registration number C17213. The trucks and the bulldozer observed by the journalists of Newsbook.com.mt do not belong to Mr Zammit.

In the past months there must have been hundreds of trips by huge trucks to illegally dump their material in the area. Our sources informed us that on most occasions the bumping continued till the early hours of the morning. It could be that the presence of the police, as we noted earlier,  led to the aborting of the illegal operation.

Monday 3rd December. Journalists from Newsbook.com.mt once again visited the site. It is very clear that several more tonnes of construction waste have been dumped in the place since our last visit. A lot of it was dumped in factory adjacent to the open land which has been totally degraded.

The enormous amount of construction material beggars belief. On an area of 10,400 sqm with an average, conservative, depth of 3m, the site must hold at the moment of writing some 31,200 cu m of construction waste. An average construction truck, a six-wheeler carries 6.3 cu m (15 tonnes). The mathematics is staggering – hundreds of journeys of large trucks were required for this devastation to be accomplished, all in the dead of night.

Did no one notice?