A group of activists decided to spend the night ‘guarding’ the memorial of Daphne Caruana Galizia to prevent government workers from clearing flowers and candles placed on the memorial by the activists themselves.

Manuel Delia, one of the organisers of this morning’s protest in a blog Friday morning commented on the heavy police presence. He advised protestors not to breech barricades and quieten down their protests while horses are passing by. 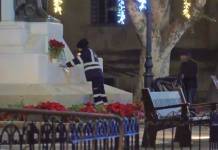 Cami Appelgren, who contested the elections for the European Parliament and other activists posted videos on Facebook and on Twitter.

Do not breach barriers

In a blog posted Friday morning Delia commented on the large police presence in Valletta writing that the ratio of policemen to protesters is likely to be unprecedented.

Protest in front of Malta House calls “Shame on You” 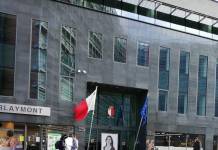 He added that the police must do what they’re told and reminded those who will be attending the protest that today’s protest is not against the police or their colleagues in the army who on occasions like today’s take a lead ceremonial role.

He invited protestors to fill out areas that are accessible to the public without seeking to breach barriers or push them from the points set by the police.

“Within that frame protesters are invited to make noise and make themselves heard as loudly and as clearly as they wish.”

He added a clear reminder. “Horses often feature in ceremonies like today’s. They won’t understand we’re not angry at them. When horses go by let’s quiet down and protest simply using our banners.”