When the flagship and command ship of the United States Sixth Fleet, the USS Mount Whitney was berthed in the Grand Harbour to give a brief a rest break for the crew, the visit was a very special one for one particular crew member.

Lieutenant Commander Nathan Hayes has a strong connection with Malta, since his mother is Maltese. He explained that in a letter he had written to his grandparents while in naval school in 1997, he had expressed a wish to sail to Malta once he graduated.

“I met my nanna on the pier and asked her if she happened to have any of the old things I sent her as I’d liked to show them to my kids, and she brought a stack of photos of me in my uniform… and a letter from bootcamp. At the end of the letter, I said that after I get done from one year of school, I’ll get assigned to a ship and I hear that the ships sometimes go to Malta and I hope some day to do that. The letter was written a couple of days before Christmas 1997, so when I was reading it, I was like, yes, I finally got to do that after all those years, so it was really wonderful,” Hayes told Newsbook.com.mt.

The USS Mount Whitney also serves as the Afloat Command Platform (ACP) of Naval Striking and Support Forces NATO. It has a crew of 160 seamen, 15 officers and 150 other civilians.

Photos: All aboard Mount Whitney 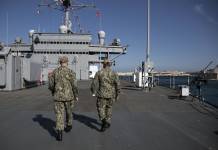 Photos: All aboard Mount Whitney