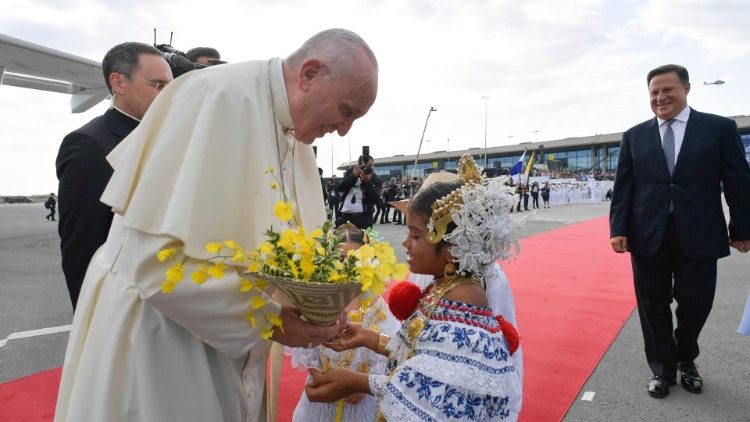 36 years after St John Paul II landed in Panama for an Apostolic Visit, Pope Francis followed in his steps and arrived in Panama to participate in the events of World Youth Days on Wednesday evening after a long and tiring journey.

The thermometer marked 33C and the evening was really humid. Hundreds were at the airport to greet him after waiting for many hours. There were children who had been preparing a welcoming dance for months, together with their parents and those who prepared their costumes. It was an evening of colour and culture.

The flight from Rome to Panama City is 13 hours long added with a six hour time difference between the two countries. All these hous had their toll on the 83 year Pontiff who looked very tired as he descended the steps of the plane to be greeted by the President of Panama and his wife.

The two personalities listened attentively to the respective national anthems. No official ceremonies were envisaged for this time.

But as the protocol personnel were ushering the guest to his car to get him to the Apostolic Nunctiature for a well deserved dinner and rest, the Pope turned and noticed the crowd that had been trying to catch his attention. The cheering seemed to energize the Pope who instead of proceeding to the car turned to the crowd and moved towards the smiling and excited faces and the beautiful babies thrust at him.

Every sign of fatigue disappeared from the Pope’s face as he waved, hugged, kissed and beamed with obvious delight at this warm welcome.

As is customery, Pope Francis sent telegrams to heads of State of the countries over which the papal plane flew on his way from Italy to Panama.

Messages which invoked Divine Blessings on the authorities and peoples, in the respective country national language, were sent to the heads of states of France, Spain, Portugal, United States, Domenican Republic, Netherlands and Columbia.