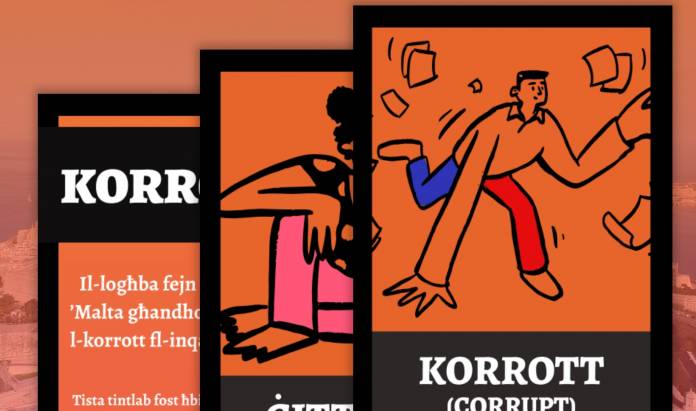 There is a new party game doing the rounds: Korrotti. The website Korrotti.com says that this is “a party game where the citizens of Malta need to find the corrupt before it’s too late”.

In a quintessentially Maltese way, this game has certainly identified a market niche and nailed the unique selling point.

Based on the popular ‘Mafia’ game, KORROTTI is a card game where a group of innocent players have to figure out and vote to out a KORROT suspect. The website promoting this game translates a dire political situation into dinner, pool or BBQ fun.

“Malta is a peaceful little island in the heart of the Mediterranean,” the game’s description goes. “Plenty of sunshine and rich in history. All sorts of different people live in Malta. But, something is fishy! And it’s not the Marsaxlokk fish market. By means of unfavourable deals to line their own pockets, The KORROTTI are trying to take over the peaceful island!”

The game has two phases, Day and Night. The rules are both hilarious and sometimes poignant. Day Cycles are dedicated to checking out last night’s news, discussions, accusations, defences, votes and verdicts.

Night cycles are for, among other things waking up the Police Commissioner and Magistrate. This game has to be played in a group of at least seven people, with two being Korrotti and five citizens.

Mario Schiavone   January 20, 2020
The Diocese of Middlesbrough and the Diocese of Lancaster have announced their commitment to divest from fossil fuels, becoming the first Catholic dioceses in...