A wall forming part of a private residence has collapsed near a construction site in Triq Mimoża in Ħamrun on Thursday. Newsbook.com.mt has received confirmation of the incident from a Police spokesperson. Police, Civil Protection and an ambulance were called on the site. 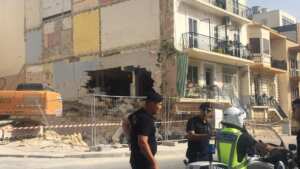 The incident happened at around 8am, at which point the residents of the house ran outside on the street. Police sources have confirmed that all the residents have managed to get out of the building and are all safe and sound.

The Malta Developers Association (MDA) has declared its shock at the news that a building next to yet another construction site, this time in Ħamrun has partly collapased. From his end, the Commissioner for Environment and Planning, Perit Alan Saliba had also lodged his concerns to the Prime Minister urging action on the matter.

A similar incident happened earlier in the year in which a building collapsed next to a construction site.

Only a few days ago a three storey building collapsed in Mellieha. A 77 year old woman was rescued from the rubble by the CPD.

At the end of last month, the Infrastructure Minister Ian Borg was asked about the progress of the new building and construction industry regulator. He told Opposition MP Karol Aquilina that the progress was still ongoing.