Newsbook.com.mt met with the churchgoers after the Pontifical Mass on the solemnity of St Paul’s Shipwreck. This morning, the Pope’s visit to Malta was formally announced in mass.

President George Vella read out a letter from the Vatican confirming that the visit will take place on 31 May, at the end of the Pontifical Mass.

Many have expressed surprise at the Apostolic visit to Malta while others said that they always believed that such a day would come. Speaking to Newsbook.com.mt, some noted that this visit will serve as an opportunity to renew one’s faith. 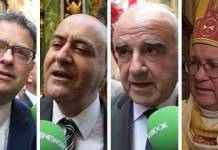