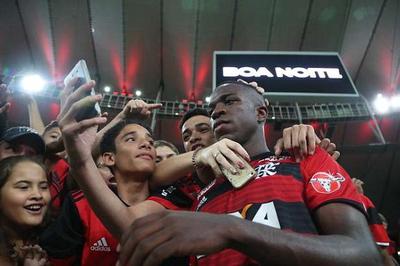 Vinicius Junior was visibly emotional after he played his last game with Flamengo in a 2-0
victory at Parana.

The 17-year-old Brazilian is expected to join Real Madrid for €38 million but can be
borrowed back from this year’s UEFA Champions League winners.

Vinicius is considered as the greatest Brazilian talent after Neymar. He has earned
international fame and was praised for his speed and technique.
The young striker scored six goals and provided three assists in fifteen matches for
Flamengo during 2018.

After the game against Parana, Vinicius went in the Maracanã’s stands and thanked the fans for their support and passion.