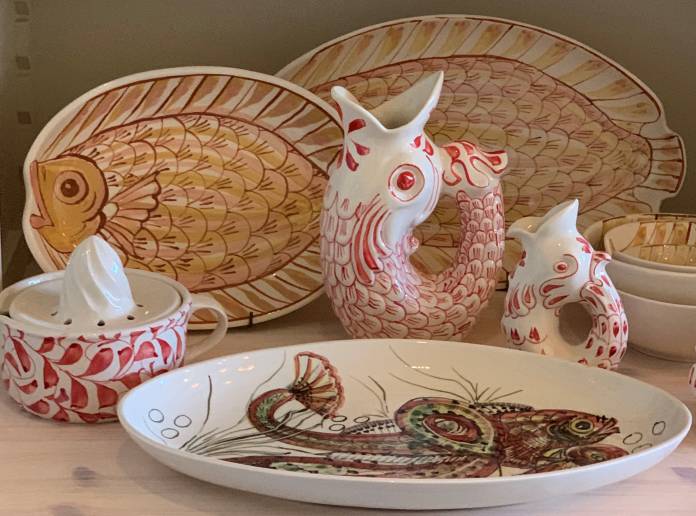 Villa Bologna Pottery has been part of Malta’s cultural heritage for the last 100 years.

Originally located in Ta’ Qali it opened in 1924. It is the oldest and best-loved pottery producer on the island. During the war it was destroyed and then relocated to the old stables at the de Trafford family home, Villa Bologna, where it remains today.

Many of its classic pieces date back to this post-war period when the prominent potter and artist, Charles Bone, came from England to work with the de Trafford family. Charles, working closely with the family, drew on inspiration from Malta and the Mediterranean. Included in these early iconic successes were the Dolphin Lamp, Pineapple Lamp and Artichoke Bowl. The quality of the design has meant that these pieces are still as
relevant and desirable today as when they were first conceived. An enduring heritage was established.

The pottery has used the same methods since the the war. Nothing is compromised, no short cuts are taken, every piece is handmade by slip casting white earthenware clay. Before the pieces enter the kiln, (they are fired twice) they are hand painted and it is here that the reputation and artistry of the pottery is best demonstrated.

Some of the staff, including Aldo Cremona, who joined the pottery in 1955, still work there today. Aldo, an extremely talented artist, also developed many of the pottery’s best loved hand painted designs. His designs include the scroll pattern, now a signature pattern, and the exquisitely colourful fish and fruit designs which are probably his finest
work. They have become collectable pieces.

After undergoing a refurbishment this year, the pottery is now open again.

“We have gone back through its design archive and focused on the very best pieces from the last 100 years. We’d love people to come in and see the best of the past and some new additions from our creative designer, Suzanne Sharp. We believe that they are worthy of such a wonderful heritage. If you are Christmas shopping, it’s a good place to start,” a statement from the pottery reads.