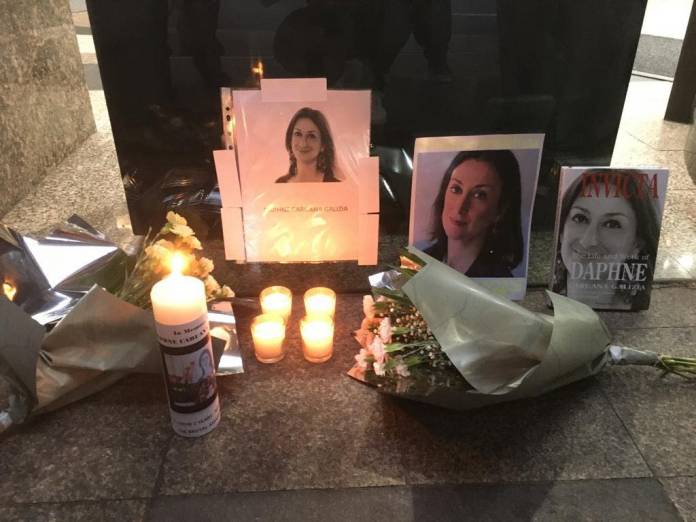 Vigils commemorating the second anniversary of the murder of Maltese journalist Daphne Caruana Galizia are taking place in cities across the world.

In Berlin, a vigil will be held outside the Maltese Embassy, organised by the European Centre for Press and Media Freedom and Reporters without Borders Germany. The vigil will take place at 6.30PM. The intention is to call on the Maltese authorities to, ‘reiterate the call on the Maltese government for an impartial and independent investigation into her death.’

A vigil has already taken place outside the Maltese Consulate at at Saint Martin Tower in Sydney Australia. This took place at 6PM (local time)

3PM – A silent gathering will be held in the field in Bidnija where the car-bomb that killed Daphne Caruana Galizia exploded.

6PM – A special Mass will held at the St Francis Conventual Church, Republic Street. The  Archbishop’s delegate Fr David Cilia and the founder and leader of Libera dalle Mafie, Don Luigi Ciottti, will lead the Mass.

Since October 16th 2017, those accused of carrying out the murder have been arrested and are set to face a preliminary hearing at the end of this month. However, little action has been taken to investigate whom masterminded the murder until the past few months.

Bowing to pressure from the European Union and a Council of Europe report calling for an investigation, the Maltese government announced a public inquiry into the murder.

The public inquiry has already faced criticism from rule of law NGOs and others who do not see it as independent and impartial as is requested.

Caruana Galizia is famed for her reports uncovering corruption within Malta’s political sphere and publishing them both in the press and through her blog ‘Running Commentary’.

Lack of resources putting strain on family as mental health issues on the increase...

Monique Agius   August 12, 2020
Warning about the pandemic's impact on mental health, the alliance stressed that it was in the country's best interest to take the necessary measures, otherwise we risk a universal depression which could be more devastating than the physical effects of the coronavirus.