As he was answering journalist’s questions before entering Castille around 10am today, the Prime Minister Robert Abela maintained that he does not communicate with Keith Schembri.

Discussions are underway about who will be be part of Abela’s Cabinet until the next general election.

In the light of an item published by the media of Partit Nazzjonalista, Abela was asked whether he is aware that his deputy had spoken to Keith Schembri. Abela replied with a question: “who said that [Keith Schembri] has spoken with my deputy?” He remarked that he is not informed of any communication between his deputy and Schembri. When asked whether he communicated with Schembri, Abela decisively replied “absolutely not”. 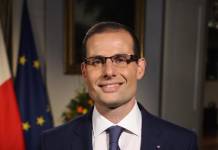 In an article published two days ago, Net News said that “the signs are clear that the mobile number of the ex-Chief of Staff of Joseph Muscat, Keith Schembri, has been reactivated”. The newspaper said that the screenshot that was published with the article itself, and later on shared on Facebook, showed that Schembri was ‘live’ or ‘online’ on the app Signal yesterday at 6.44pm. Although the screenshot shows this, there was no evidence of the date and time when it was taken. Possibly, Keith Schembri is using a new SIM card with his former mobile number.

A spokesperson for a Maltese communication company confirmed with Newsbook.com.mt that it is possible for a person to get a Sim Card with the same number of the lost mobile. Therefore, if Schembri appeared as ‘online’ on apps that operate with one’s mobile number, namely Signal and WhatsApp, this does not necessarily indicate that the lost mobile device has been found. 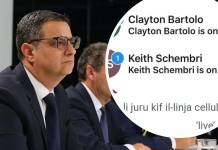 Keith Schembri’s lost mobile phone was a hot potato last month, after it was said in Court that the Police could not find Schembri’s mobile. According to Schembri himself, the mobile is lost .

Schembri resigned from his post as the Prime Minister’s Chief of Staff last November after he was arrested and interrogated in relation with the assassination of journalist Daphne Caruana Galizia, whereby it was also revealed that he is allegedly the friend of the company 17 Black Yorgen Fenech. It was reported that he was providing him with information about what was going on in the investigations.

The Inspector Keith Arnaud, who was leading the investigation of the Daphne Caruana Galizia’s murder had told the police that the mobile could not be found. The mobile can be an important source of information for the police.

John Paul Cordina   February 18, 2020
Malta registered a 4.8% drop in the amount of solid waste generated in 2018, but construction waste – which accounts for nearly three quarters of the amount – bucked the trend with an 11.8% increase.

John Paul Cordina   February 18, 2020
Former PN leader Simon Busuttil warned that Malta had become a democracy only in name following the assassination of journalist Daphne Caruana Galizia in his last speech in parliament this evening.