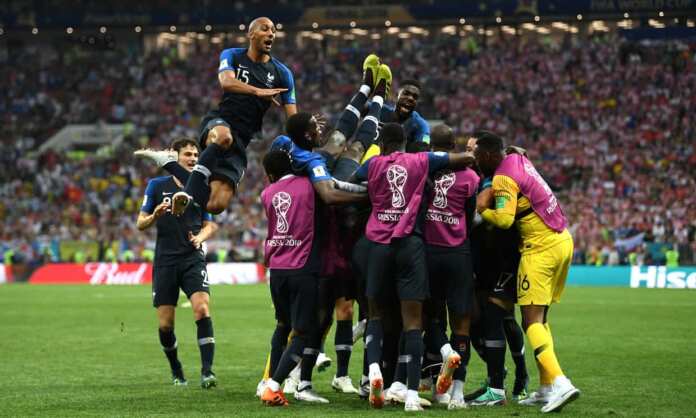 France come out as winners at the Luzhniki Stadium and have won the World Cup for the second time after Didier Deschamps lifted the trophy as a player in 1998.

Les Bleus opened the scoring in a fortunate manner as Antoine Grienzmann’s freekick was deflected by Mario Mandzukic past the Croatian goalkeeper. Croatia were the better side throughout the first 45 minutes and managed to find an equalizer thanks to a wonderful, left-footed effort by Ivan Perisic in the 28th minute. However France had other plans and made it 2-1 when Griezmann kept his cool to convert a penalty as the first half was drawing to an end.

France’s performance improved as soon as the match restarted and midfielder Paul Pogba added a third goal for Les Bleus as Subasic failed to save his shot. Wonderkid Mbappe increased France’s goal advantage even further with another goal in the 65th minute before Hugo Lloris’ mistake gave hope to the Croatians with less than 30 minutes to go.

Croatia tried desperately to find a way past the French defence but Deschamps’ side held on to win a wonderful World Cup final in which a total of 6 goals were scored. Croatia’s dream of a first World Cup title was shattered but they will return to their homeland with a lot of fond memories of their memorable run to the final.