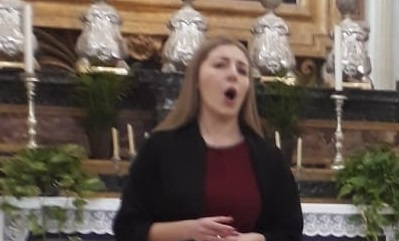 Barocco Foundation presented a lunch-time recital featuring soprano Marvic Baldacchino, accompanied at the keyboard by Maria Elena Farrugia. The beautiful church of Santa Caterina d’Italia was the venue of this event courtesy of the rector, Don Gino Gauci.

This was the first time I was hearing Marvic Baldacchino’s voice in such a challenging event and she definitely is very promising. She has a presence and a confident manner, as well as an engaging personality. The young lady has a very good memory too: singing in three different languages in various styles. The ability to flow from one idiom and style to another was notable.

Memory is not enough if there is no convincing projection of the subject matter of work and this exactly is what did not lack as the programme unfolded. Most of the pieces were lovely, little compact gems. The singer was aided by a generally very clear diction to help her succeed in doing this, not to mention the warm and solid support of the accompanist whose admirable timing and restraint for example provided part of the magic in which Richard Strauß’s Morgen, No. 27 n.4 is enshrined. On the other hand, Maria Elena Farrugia’s playing could be really energetic, underscoring the urgent verve in Handel’s Da tempeste il legno infranto also from Giulio Cesare.

A spent and suffering soul

Here I am anticipating things because the pieces and the opera excerpts had to wait for the performance of three very fine French songs. Fauré’s Après un rêve was dreamy before and after clearly it was sung and projected. In Debussy’s Romance (1891) the yearning of a spent and suffering soul was there as was the dignified, plaintive touch to Bizet’s Ouvre ton coeur. The latter opened a window into the rarely heard song world of that composer.
The second Lied in the recital was Schubert’s Gretchen am Spinnrade, D. 118. It was full of turmoil and anguish. abetted by the relentless piano imitating the whirl of a rotating wheel which has the first and the last word.

So it was too with the two Handel arias. In Piangerò la sorta mia from Giulio Cesare there was no lack of anguish and dread. In this extended da capo aria there was a brief fast episode of rebellious colleagues before the more placid phase returned. On the other hand, the tempest really raged expressed in fast-paced difficult coloratura which was very well- tackled. Act! Ich fühl’s from Mozart’s Die Zauberflõte and one of the most tender pieces he wrote was especially good. Marvic Baldacchino concluded with some Italian bel canto with Amina’s last aria from Bellini’s La Sonnambula. Clear and smoothly phrased, it was matched by an equally tender Donde lieta uscì from Puccini’s La Bohème. The promise is there but there is room for improvement with some more attention to achieving more polished climactic notes here and there. The audience really warmed to this duo and the encore conceded was the very lively L’invito by Rossini.