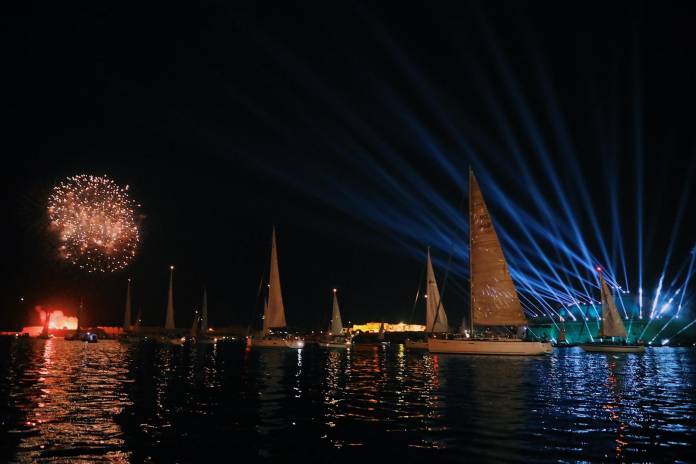 The Valletta Pageant of the Seas, one of the Valletta Cultural Agency’s large-scale events, was broadcast live on Sunday 16th August for television audiences in light of restrictions on mass gatherings and events.

Under the artistic direction of Chris Baldwin and presented by Keith Demicoli and Sarah-Lee Zammit with the support of sports commentator Sandro Micallef, the third edition of the Valletta Pageant of the Seas saw the iconic Tellieqa Telliqun race happen once again in the Grand Harbour.

The race constituted of community members who came together to build nine sea vessels using recycled material. In first place was Ryan Farrugia and Sephora Sammut, racing with the name of ‘Quickie’.  The winning team received a cash prize of €1,500. ‘The Return of the Runaway Ferris Wheel’ by David Cristina, Stephen Dalli and Terence Delia, was awarded the People’s Choice Award trophy after being chosen by the public on the VCA’s Facebook page.

The event culminated in a beautiful spectacle on the water, titled Il-Mappa. The event included the participation of 34 sailing boats and 20 dgħajjes tal-pass. The event saw the sails of the sailing boats change into mirrors, beautifully illuminated with various projections tied to Valletta. The artistic concept focused on the lived experience of Valletta residents and artisans working in the city, particularly work tied to hands, such as Guilders, Engineers, Silversmiths and Bell Ringers. The event included the music direction of Andrew Alamango, visual concepts and direction by Charlie Cauchi, and light design and visual coordination by Petko Tanchev.  The event also included music production by Alamango and Andrej Vujicic; mixing and mastering by Vujicic and Pablo Prada; with motion graphic designer Andres Algeciras.

The VCA said that the event was a success thanks to various stakeholders such as Valletta residents, Mater Dei Hospital, Heritage Malta, Armed Forces of Malta, Civil Protection Department, Malta Police Force, Transport Malta, Health Department, Cleansing Directorate and many others.

Splendid Beethoven at The Splendid

Spectacular light installation in front of law courts in Valletta