The Centers for Disease Control and Prevention, CDC, in the United Stated has informed health officials in all 50 states to be ready to distribute a vaccine by the 1st of November.

This has sparked concern amongst US citizens since the vaccine would be distributed just days before the Presidential election.

BBC is reporting that three documents were sent out last month giving detailed scenarios for distributing two unidentified vaccine candidates. This was also reported by the New York Times.

According to these document priority for the vaccine would be given to health care professionals, the over-65s and communities known to be at greater risk of infection.

A number of possible vaccines are undergoing clinical trials, and some are in their final stage of testing.

According to the US’s top infectious disease expert, Dr Anthony Fauci, a vaccine might be made available before trials are completed if the results were overwhelmingly positive. However, other scientists fear politics is driving the announcement made by the Centers for Disease Control and Prevention. 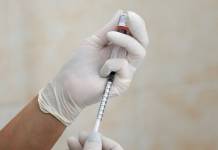