The death of the most prominent liberal judge on the US Supreme Court – Ruth Bader Ginsburg – weeks before the US Presidential election has quickly led to political controversy as US President Donald Trump and the Republican Party eye an opportunity to tilt the ideological balance of the nine-member court further in their favour.

Bader Ginsburg, who was 87, succumbed to pancreatic cancer on Friday. 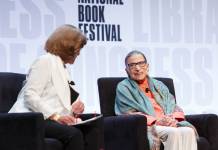 Only four years ago, Republicans insisted that President Barack Obama should not get to nominate a Supreme Court Justice in an election year following the death of conservative judge Antonin Scalia in March 2016. No Senate vote was ultimately held on Obama’s nominee, Judge Merrick Garland.

But Senate Majority Leader Mitch McConnell, who justified blocking Garland’s nomination on the grounds that it was an election year – even though the election was further away then than it is now – has made clear his intention to bring to a vote any nomination Trump would make. And at a campaign rally in North Carolina, Trump pledged to nominate a conservative woman judge to replace the liberal icon.

The Democratic Party, including their presidential candidate Joe Biden, have been holding Republicans’ past stance against them, insisting that whoever is elected President in November should nominate Bader Ginsburg’s successor.

And it remains to be seen whether all Republican Senators would back the controversial move to forge ahead with a vote on Trump’s pick, particularly those facing tough re-election battles.

Maine Senator Susan Collins has already broken ranks, effectively echoing the Democrats’ position. The senator represents a state that has increasingly leaned Democratic over the years, and polls have consistently showed her trailing her Democratic challenger Sara Gideon. But three more Republican senators would need to join Collins to thwart efforts to rush through a new Supreme Court Justice.

In any case, Bader Ginsburg’s death is likely to impact the upcoming elections, given the Supreme Court’s importance in shaping policy.

But should the Republicans succeed in choosing her replacement, the Democratic Party may be tempted to retaliate through a controversial move: increasing the number of judges on the Supreme Court from the present 9.

Such a move could only be possible if Biden wins the presidency and if the party regains control of the Senate: polls suggest that the former is the most likely option but the latter, while possible, is far from certain. The party would also need to retain control of the House of Representatives, a feat which would likely be assured if it managed the other two.