Full access to restaurants in Marsalforn will soon be restored as works at Il-Menqa has reached an advanced stage, Gozo Minister Clint Camilleri said today.

In a visit to the Menqa, part of a €3 million Marsalforn master plan, Camilleri said that the sewage system and other service infrastructure had been upgraded, and new street lighting and CCTV cameras were installed. 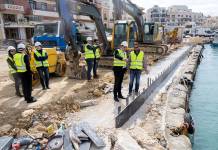 He added that porfido paving had been placed in front of all of the area’s restaurants, and that once the area in front of the bay would be completed, full access would be restored.

Camilleri reminded that the masterplan included new paving in Triq il-Port, Triq il-Forn, Triq San Ġużepp, Rabat Road and Sir Michelangelo Refalo Square, new street lighting and new street furniture to give a contemporary look to the area. He emphasised that adequate spaces would be provided for bars and restaurants to place tables outside.

He said that the masterplan was the result of the government’s recognition of the efforts the private sector had undertaken to transform Marsalforn into a tourism and entertainment hub. He said that the project should lead to further investment into the Gozitan tourism sector, which accounted for half of the island’s economy and which employed a fifth of its workforce

The minister also emphasised that the promenade would be pedestrianised in line with the government’s efforts to encourage alternative forms of transport.