The Union of Professional Educators, UPE – Voice of the Workers has appealed to Prime Minister Robert Abela and to Education Minister Owen Bonnici to immediately shut down schools. The UPE described the coronavirus cases in schools as alarming.

The Executive Head of UPE, Graham Sansone delivered his message to the authorities in a video posted on Facebook, stating that the situation is getting worse as cases registered in schools can be transmitted within the community as students or teachers could end up infecting their families.

Sansone mentioned a particular case of an educator who contracted COVID-19 and was transmitted to her parents which are considered as medically vulnerable. Both relatives are over the age of 80, and one of them has yesterday been admitted to hospital after suffering complications due to COVID-19.

He also mentioned that the way the educational system is operating is not making sens, specifically referring to quarantine and how educators apply for sick leave before they get tested.

“The Union can also confirm that the number of teachers on quarantine or on sick leave as well as those who are being shielded due to their vulnerable status, has decimated the educational working force rendering some schools challenging to manage due to the sheer number of vacant classes,” said the union.

The UPE Executive Head has also condemned the reasoning after the deaths of the elderly. Graham Sansone said that it is unacceptable that such deaths can be justified because the patients had other underlying conditions. 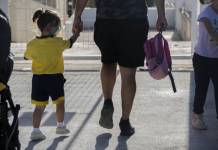 In view of the situation, the UPE is calling once again on Government, Church officials as well as Private School owners to revert to online lessons as to stop the spread of COVID-19 within our schools, otherwise the Union said it will have no other option but to enforce strict industrial action within the next hours.

On Wednesday, students from the last two remaining year groups returned to their schools so that from today all children attending state schools are now back in education, in their respective classrooms, announced the Ministry for Education.

This follows a decision that was taken for this scholastic year that students attending the
compulsory years of their education return to school spread over a period of one week between October 7, 2020 and today.

This decision was also followed by other schools, notably Church schools.

John Paul Cordina   October 31, 2020
Slovakia is seeking to test everyone over the age of 10 – approximately 4 million people – for Covid-19 in a bid to avoid a total lockdown, but experts, as well as the country’s President Zuzana Čaputová, have been sceptical of the plan.