On the occasion of the European 112 day, a new version of the local emergency app, ‘112MT’, was launched. The new app offers numerous more services and assistance in the case of an emergency. The app was launched by the Ministry for Home Affairs together with servizz.gov.

In a statement, it was explained that the new version of the ‘112MT’ app will offer a more efficient way for citizens to easily make contact with the Police, the Armed Forces of Malta (AFM), the Civil Protection Department (CPD) and with Mater Dei Hospital.

Among the many facilities that the app will offer, there is a localization service, once contact is established with the emergency services. Thus, the GPS indicates where assistance is needed when a situation arises. The app also offers assistance through non-verbal informative icons for persons who suffer from a hearing impairment.

During his speech, Chief Executive Officer of servizz.gov Winston Pirotta described that in 2019, the app was downloaded by over a thousand users, and therefore, the updated version is expected to show similar results.

Minister for Home Affairs Byron Camilleri mentioned that last year, the emergency control centre registered 382,737 telephone calls. He added that however, around 79% of the calls were not related to emergency services.

The updated version of ‘112MT’ can be downloaded online in maltaapps, Google Play Store, or Apple Store.

Watch: What happens when you call 112? 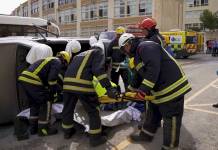