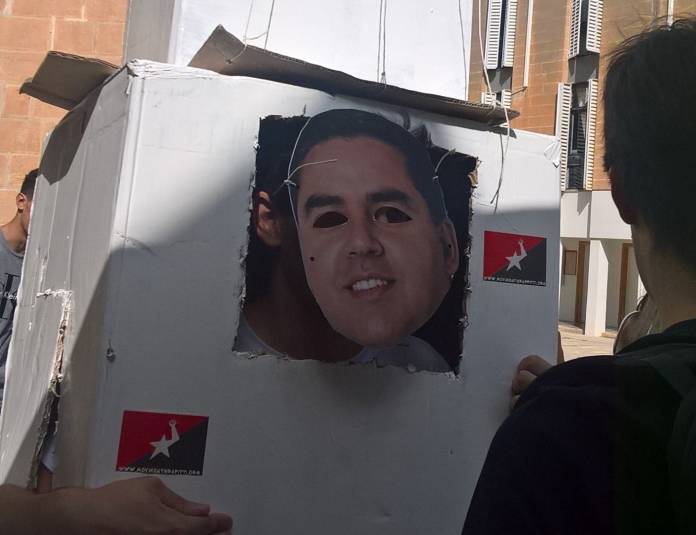 The University of Malta (UM) has stated that Freshers’ Week is not an appropriate platform to voice any sort of protest. This follows an incident where security guards at UM confiscated a mask of Transport Minister Ian Borg being worn by a Moviment Graffitti (MG) activist as part of a costume.

In a statement, UM explained that Freshers’ Week, an event on campus, “is meant to showcase student organisations, private and public enterprise and to introduce new students to university life.” It went on to state that the mask was confiscated after the activist was seen mingling with students visiting other stands, away from the MG stand itself.

“It was at this point that security officers, concerned that the matter might provoke a reaction and escalate, decided to act to defuse the situation”, said the statement.

UM added that it actively supports political debate as evidenced, inter alia, by the setting up of the Malta University Debating Union (MUDU).

‘Politics are not part of Fresher’s Week,’ security guards told members of Moviment Graffitti this morning when they confiscated a mask of Transport Minister Ian Borg from the group.

Speaking to Newsbook.com.mt, MG’s student spokesperson explained that the incident had happened around 11AM this morning, while promoting their movement to new students at Malta University.

Security guards stepped in and removed the mask which one of the activists had put on their costume.

‘The costume was intended for reaching out to new students and it was meant to be some political satire,’ the spokesperson explained.

This was just one of a number of satirical costumes and masks which MG had created for the event. These included controversial figures connected with development in Malta. Minister Borg was the only political figure among them, with others including the head of Malta Developers Association, Sandro Chetcuti. Borg was attached to one activist in a ‘tower costume’.

‘We still don’t know who ordered that the mask be confiscated. When we asked for it back, they wouldn’t give it back,’ the MG spokesperson said.

‘We gave them our details so they could contact us about it. We still haven’t heard from them,’ they added.

When asked about political messaging on campus, the spokesperson wasn’t sure whether there were any rules on this. They added that there several student organisations at the university that are party affiliated, ‘but security does not take offence to them.’

The spokesperson continued by explaining that if there are guidelines, these should be the responsibility of the Students Union KSU to communicate them to students.

‘We’ve had a stand at Fresher’s Week for a number of years but this is the first time something like this has happened,’ they added.

MG has submitted an official complaint to the University’s Precincts Office.

Wearing a visor and face mask