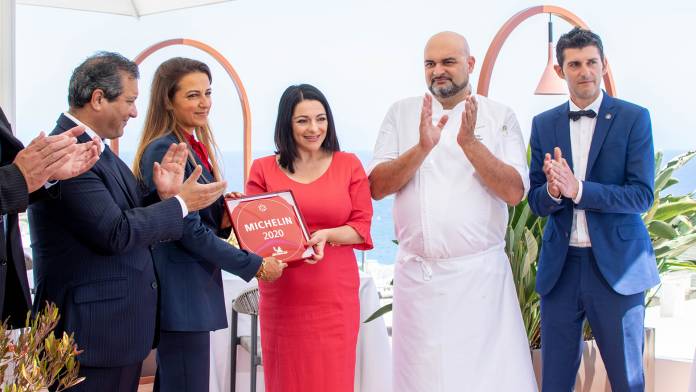 After a few months of sleep due to the pandemic, Under Grain received the recognition which has been long overdue.

On the 26th February 2020, Under Grain was awarded a One Michelin star, just a few months after its official opening. Under Grain is one of the first restaurants in Malta to be awarded such a prestigious award and also the first hotel restaurant in the heart of Valletta that holds such an honour.

Minister for Tourism and Consumer Protection Julia Farrugia Portelli commemorated the award officially on Wednesday 10th June, by presenting the Michelin plaque of 2020 to the Hospitality Director, Claire Zammit Xuereb, in the presence of the Malta Tourism Authority high officials.

“Being awarded a Michelin star is an honour, not just to the Under Grain team, but to the whole AX Group’” claims Claire Zammit Xuereb, Hospitality Director, AX Hotels, “Putting our baby to sleep, after receiving such high recognition, was one of the hardest things we had to do this year. However, we were committed to keep on working on our brand behind closed doors to re-open with a bang, which we certainly have!”

“Seeing the physical Michelin plaque brought us straight to reality. It’s an emotional day in which our hard work has been duly recognised,” claims Victor Borg, Executive Chef at Under Grain.

Matthew Gingell Littlejohn, General Manager of AX Hotels Valletta properties expresses his gratitude towards the whole Under Grain team and goes on to say that this award “brings forth a higher level of responsibility to give out the best possible service to our guests, which we have always been committed to giving.”

After the easing of government restrictions, Under Grain re-opened its doors on Friday 5th June. After a very successful opening weekend, Under Grain has three fully-booked weekends in advance. Currently solely opening on Fridays and Saturdays, the business has picked up so rapidly that it is currently under discussion whether Under Grain should open during weekdays.

Under Grain has now moved Under the Stars, taking its Michelin star menu to the rooftop and is open on Fridays and Saturdays from 7.30 to 10.30 pm (last order). Bookings may be done online.

Under Grain awarded a Michelin Star

Watch: “Do what is right, not what is easy” – Karl Micallef, Classic Group CEO

Watch: “My house is my castle and my haven” – Steve Calleja, Strand Palace Agencies Ltd