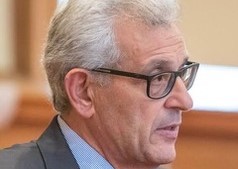 Professor Ronald G. Sultana, a member of the Faculty of Education, and founding director of the Euro-Mediterranean Centre for Educational Research, will be awarded a Doctorate Honoris Causa by Université Laval in Quebec for his work in education and career guidance.

The Honorary Doctorate is the highest distinction awarded by Laval University, “in recognition of an academic’s exemplary and outstanding achievement and influence in one of the disciplinary fields taught at Laval”.

The conferment ceremony will be held in Quebec on the 7th June 2020.

Professor Sultana studied in Malta and Reading (UK), and holds a PhD from the University of Waikato in New Zealand. He was Fulbright Scholar at Stanford University in the US, and visiting professor in several universities internationally. He has published widely in a range of areas on education in Europe and the MENA region, on behalf of the European Commission, the UN, and several governmental and NGO development agencies. Most of his work draws on sociological and comparative perspectives and focuses on transitions between school and work.