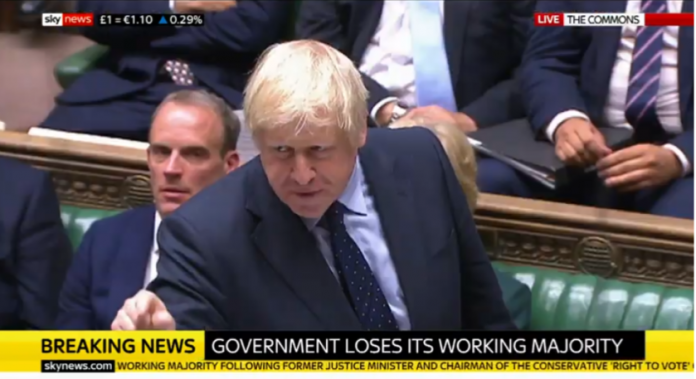 Protesters have rallied in front of the British Parliament as lawmakers debate a crucial bill that could pave the way for no-deal Brexit to be blocked later this week.

While both those in favour and those against have a presence in Westminster, those against Brexit were louder and more visible, several news agencies reported.

BBC political correspondent Iain Watson tweeted that 17 Labour MPs including Gloria De Piero, Stephen Kinnock and Caroline Flint plan to amend tomorrow’s anti-No Deal bill (if the opposition win tonight) to call for the latest version of the deal to be put to parliament.

The UK Prime Minister Boris Johnson has lost his working majority in a symbolic move as Conservative MP Dr Philip Lee walked across the Parliament floor to the Liberal Democrat benches.

There had been believed to be around 15 rebels within the Conservative Party who said they will not support the Prime Minister on his No-Deal Brexit.

This leaves the government with no working majority in the Commons.

In Dr Lee’s defection he explains that the government was ‘aggressively pursuing a damaging Brexit in unprincipled ways … It is putting lives and livelihoods at risk unnecessarily and it is wantonly endangering the integrity of the United Kingdom … More widely, it is undermining our country’s economy, democracy and role in the world. It is using political manipulation, bullying and lies. And it is doing these things in a deliberate and considered way.’

After a great deal of thought, I have reached the conclusion that it is no longer possible to serve my constituents’ and country’s best interests as a Conservative Member of Parliament. My letter to the Prime Minister: pic.twitter.com/0QreSbSdwR

The move comes as one of the Tory rebels Philip Hammond said he would be voting for legislation that would effectively prevent a No-Deal Brexit.

According to Number 10 officials, the Prime Minister had threatened to call a snap General Election on the 14th October if he was to lose the vote today.

Shortly after the Tory MP the Opposition leader Jeremy Corbyn said that the government was acting recklessly and had no plan except ‘to crash out of the EU without a deal,’

He added that the government had failed to provide information regarding the no-deal preparations adding that it was ‘hiding from scrutiny, from the people, and trying to hide us from their true intentions’

In a final ditch plea, Corbyn states that it is the, ‘last chance to stop this government from riding roughshod over our constitutional and democratic rights.’

Jeremy Corbyn says the government “only has one plan: to crash out of the EU without a deal” and says the PM is leading a “government of cowardice”.