MPs have voted in the House of Commons, asking the Prime Minister to ask for a delay to Brexit until the 30th June.

Breaking: MPs have voted in favour of asking Theresa May to request a Brexit delay until the 30th of June.

The Reuters news agency is also reporting that according to the draft conclusions of leader’s Summit tomorrow, they will support a Brexit delay.

Reuters is also reporting that this will be June 1st 2019 and not the 30th as the Prime Minister had initially requested.

The EU Council President Donald Tusk has also outlined in a letter to the EU27 leaders ahead of tomorrow’s Summit about a flexible extension for the UK. He says that it should be as long as needed but not to go beyond a year.

There are times when you need to give time time.
My letter to EU leaders ahead of tomorrow’s #EUCO: https://t.co/bAsz4Qx36s#Brexit

‘This is why I believe we should also discuss an alternative, longer extension. One possibility would be a flexible extension, which would last only as long as necessary and no longer than one year, as beyond that date we will need to decide unanimously on some key European projects.

The flexibility would allow to terminate the extension automatically, as soon as both sides have ratified the Withdrawal Agreement. The UK would be free to leave whenever it is ready. And the EU27 would avoid repeated Brexit summits. Importantly, a long extension would provide more certainty and predictability by removing the threat of constantly shifting cliff-edge dates.

Furthermore, in the event of a continued stalemate, such a longer extension would allow the UK to rethink its Brexit strategy.’ Tusk writes.

The ‘Flextension’ does come with conditions.

According to Tusk, the Withdrawal Agreement cannot be re-opened, there are to be only negotiations on the future relationship, the ‘Political Declaration’. The UK would also have to maintain its cooperation as a member state leaving the Union.

The EU President does explain that until the time that the UK finally leaves, it will maintain all of its rights and obligations. He also states that the option is open if the UK wants to revoke Article 50. 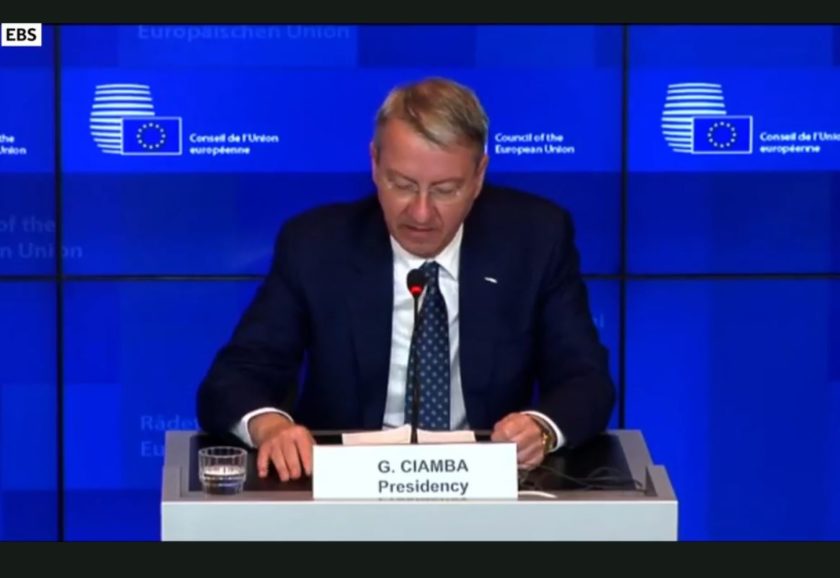 The UK Prime Minister has 24 hours to produce a viable way forward in order for a further extension of Article 50 to June 30th to be considered, the representative of the Romanian Presidency of the EU has said.

Theresa May must produce a plan that can get political representatives at home to support and will be ready in time for consideration during tomorrow’s EU Brussels summit of European leaders.

The condition was presented by the Romanian diplomat George Ciamba, representing his country’s presidency of the EU.

‘The prolongation of the Article 50 deadline is an instrument and not an objective in itself. The British side must outline a clear plan with credible political backing to justify the decision of the European Council in favour of the extension,’ Ciamba told press in Luxembourg.

Brexit: May officially asks for another extension

The announcement follows Mrs May’s recognition of the need for a further extension to the current delay to the Brexit process, one which would technically see the UK leave the EU without a deal on Friday 12th April.

This original deadline had been agreed between EU leaders and the UK Prime Minister as the ‘worst case scenario’ option should MPs not support the ‘withdrawal agreement’ for a third time.  This became a reality when MPs voted against an adapted version of the deal for the third time. Had they accepted then, the extension would’ve lasted until May 22nd.

Should the Prime Minister be able to meet this condition by tomorrow evening, EU leaders will discuss both whether to offer the extension and her anticipated June 30th deadline.

Extension must serve a purpose

The EU’s Chief negotiator Michel Barnier remained optimistic about the current situation, given that the Government and Opposition Labour Party are now talking about the way forward on the deal and this could lead to a consensus.

‘We all expressed our hopes and expectations in this regard … that this dialogue will conclude with a positive result which will allow us at last to have a positive majority emerge with regard to this withdrawal agreement.’ Barnier told reporters.

However, Barnier did stress that any further extension of the deal must ‘serve a purpose.’

‘This extension has to serve a purpose; to provide more time to ensure that the political process I’ve described can be crowned with success and that this majority can be attained.’

‘Brexit was the trigger,’ a new Maltese citizen explains

While a ‘redline’ has been drawn over negotiation of the substance of the withdrawal agreement, Barnier did hint that there is a possibility that the political declaration – the future relationship between the UK and the EU, could include elements like a customs union. He explained such an addition could be carried out within, ‘a few hours or days.’

European Ministers attending the meeting echoed optimism about an extension saying they wanted to avoid a No-Deal Brexit, but extension would only come with clear explanation.

Discussions between the Government and Opposition are still ongoing with no clear consensus drawn between the two. The Prime Minister is also currently meeting with her French and German counterparts (Emmanuel Macron and Angela Merkel) in their respective capitals, Paris and Berlin.

Taking part in May elections?

While prospects of the UK participating in the European Elections in May has been treated as a disincentive to speed up departure, current circumstances have forced contingencies to be put in place.

It is understood that should a possible extension of Article 50 elapse over into the European elections, the UK government is preparing for the period.

The decision signals a belief that the UK’s departure could be delayed past the May 23rd when Europeans go to the polls.

The Cabinet Office has warned that the move does not directly mean that the UK will take part, rather the elections would be stopped if the UK managed to leave before the election date.

Speaking to CNN, a Cabinet Office spokesperson said that, ‘It remains the government’s intention to leave the EU with a deal and pass the necessary legislation before 22 May, so that we do not need to participate in European Parliamentary elections.’

Previous discussions about extensions to Article 50 have included June 30th as a possible date of departure.

This was proposed by the Prime Minister during the previous round of discussions.

Mrs May had warned that this date would mean that the UK would technically have to participate in the EU elections, angering staunch Brexiteers determined for the UK to leave before.